STARTING
When I first started the challenge I set out to create a game table with two benches. The requirements I received from my wife were that the benches must be stored underneath it and it must have a drawer.

After asking her many questions I realized that she was describing a table that we currently own, and that she uses everyday. 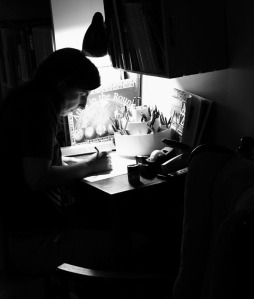 It turned out for the best but I was back to the drawing board! I bought a copy of 500 Tables from Amazon, and sat down to ponder it for the next couple of days. I researched some of the contributors online, and got a better idea of what I wanted to do for this design. After about a week of sketching, and re-sketching, in my off hours, I took the design from 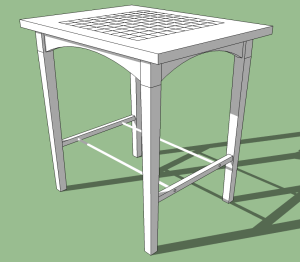 The entire process took a couple of weeks from start to finish. Looking back the work was heavily influenced by some of the work in the 500 Tables book.

CONCEPT TO REALITY
Normally, I do not make full size drawings. But this time I took Neal’s advice and printed out the front view of the table at a 1”=1” scale. I am really glad I did. This allowed me to see that the arches on the table would be too short for my legs.

Originally the arches on the ends of the table would be 3” from the bottom of the table top to the top of the arch. This made for a shallow arch, and not enough leg room. After putting the drawing up on the wall, I lengthened the legs by an inch, and narrowed the rails. Once I was happy with the look on SketchUp, I printed out the rails, and put them aside. I would later use these printouts to help shape the first set of rails that I made. 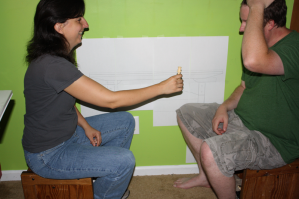 SHOP PREP
I must confess that I was not able to devote all my shop time to this project. During the first month, most of the time was devoted to working on a crib that I am just now finishing.

I thought that I would be done with it BEFORE this challenge, but due to the complexity of the build, it took much longer than I expected. Once the crib was at a stage that it was ready for finishing, I put it aside, and started working on the table. I used my wife’s camera to record my cleaning the shop. Take a look at the video.

MATERIAL SELECTION
Last year I participated in a group buy with the North Carolina Woodworkers Board. I was fortunate to buy 100 board feet of #2 common cherry for $1.15/bdft. I used this wood for the legs and rails on this project. After having worked with Sapelle for so long, cherry was a pleasure to work with.

The top, on the other hand, will have to count as a laminate. It is a remainder from the bathroom sink cabinet I completed for our house the year before. 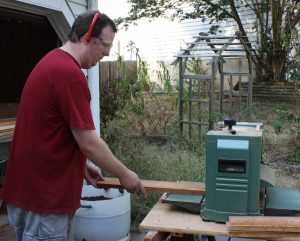 This top turned out to be more work that I expected. My plan called for 5” bevels on the ends, and 4” bevels along the sides. I took awhile to figure out how to cut these bevels out of the 1 ½” top. Eventually I settled on clamping the top to the side of my bench, and used my circular saw to make the initial cuts. Then I took my handsaw, climbed up on my bench and sawed and sawed and sawed. After taking a breather I got out my jack plane and smoothed the bevels. For a prefab top it took a lot of work to modify it. 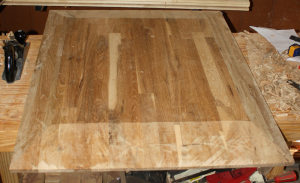 SHAPING AND SCRAPING
One of the most challenging parts of this build was the rail system for the base. Up until now most of the projects I have done are straight and square. This project has four arches and the smaller curves above the legs. Most of this work was done with the band saw and drill press. Then I refined the curves with my spoke shave, and scrapers. Once I got the curve in a pleasing line I chamfered the corners of the arches and then smoothed them over with a rasp.

I have never cut haunched through tenons before, so getting the mortises just right took a little longer than normal. But I like how they turned out in the end. 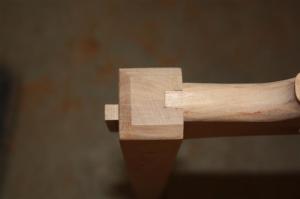 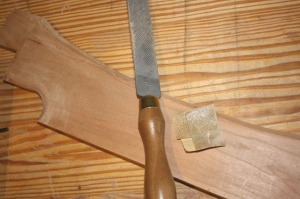 After the rails where done I cut the mortise in the legs. I then cut tapers on the legs to emphasize the arches in the rails. It is hard to see in the pictures of the final project, but the legs have a 1 degree taper from just below the mortises. To put it all together, I glued and pegged the tenons into the mortises on the legs. Then I screwed in corner blocks to reinforce where the rails join together.

The finish went on with ease. I just wiped in the varnish, and sanded between coats. After the final coat, I rubbed down the entire surface with a brown paper bag to remove and nibs.

ASSEMBLY
The top is attached to the base using 2 guide pins (3/8” oak dowels), and 4 expansion clips. I manufactured the expansion clips to hold the top on, to allow for expansion and contraction.

We have had some L brackets lying around for years…well, now we have 2 less!

After I filed down the sharp edges I made a notch for each that would allow 30 degrees of movement or so.

FINDING A HOME
The table now resides in our living room. It will at times be used as a game table, but most of the time, it will be used as an end table for our Big Green Chair. 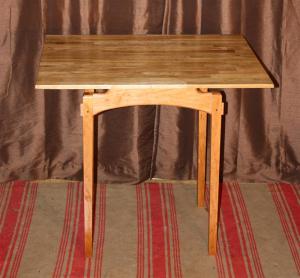 Here is the breakdown for materials I have in this table: 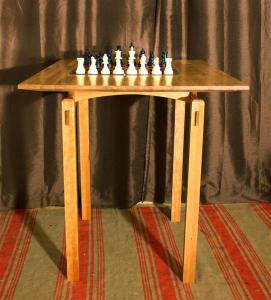 Thanks, Rick, for putting on the Sawdust Chronicles Challenge this year. It has been a lot of fun, and I have picked up several new skills along the way. I also got a chance to use some of the tools that my wife has been buying me over the years! 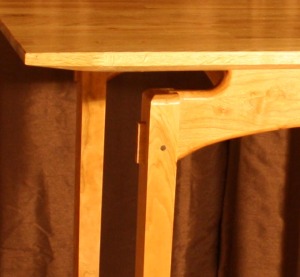 Also, there is additional information on my blog which gives the day to day about what I did when.

You can also check out David’s original sumbission in MS Doc form here.