Well, my basic decision is made. It’ll be a small table. A table with a different “slant”.

The top will be veneered with a “Louis cube” design. About 15 inches square, although that may change after I see how it looks drawn up.

Since a sort of cube will be featured on the top, how about a cube for the support? To be precise, a Rubik’s cube. A Rubik’s cube standing on one corner with the top supported on the opposing corner.

So that’s it for the beginning of my blog on the challenge. Now to warm up a pencil…

My build blog, the planning continues

Okay, this is stretching my abilities with Google’s SketchUp to the limit. I hope to have usable drawings in the next couple of days.
I had one of the top done, after several hours of trying, only to have it go all funny with the colors and end up useless. Oh well, it taught me a few things about the program, so it wasn’t a total loss. First time I’d used the protractor tool for one thing, and the rotate tool fore another. If I get nothing else out of all this, it will leave me with a lot better command of SketchUp.

Enough typing; back to the planning!

Talk to you all again soon. Happy woodworking!

Okay, for better or worse, here are the rough sketches of the top and pedestal. It’s a half pattern of the top, as I got sick of drawing all those elements, and is in gray scale as I haven’t decided on the woods yet.

The pedestal is shown without the top or base. Colour is shown, but is subject to change. 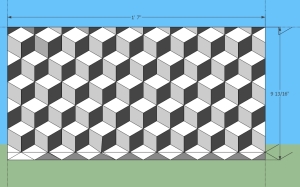 So, what do you think so far?

Here’s the base with the pedestal attached. Should make things a bit clearer.

Well, I picked up a 5 x 5 sheet of 1/2 ibch Baltic birch ply and a 12 x 96 inch roll of maple veneer for the project. Cost including taxes was about $75. (I wish we got better prices up here in Canada)

Spent most of my shop time this weekend experimenting with coloring the veneer for the Rubik’s cube. So far I’m not happy with the results. I want a brilliant set of colors and so far they’ve been too muted. I may have to rethink my material choice and face the cube with something already brightly colored as a surface layer on the ply substrate.

The top is still going to be the louis cube marquetry pattern. The veneers I have on hand are the maple I just bought, some ash, cherry and walnut. Proably be walnut. maple and ash for the final unless I find something I like to bring the color out in that cherry. As it is, you have a hard time telling it from the maple. I know time will do it, but not the ammount of time we have left.

I won’t be doing any photos for a while as my wife is in Windsor, Ontario for her neice’s wedding and she has our camera with her. I’ll have to get a friend to bring his camera over for some shots.

Well, I spent the last few days experimenting with coloring techniques for the Rubik’s cube part of my build project. I want this to look as realistic as possible and so far haven’t come up with anything that will give me the results that I want.

One surprise I got was when, believe it or not, I tried Rit fabric dye. It worked surprisingly well. Good color, even coverage and so on . I tested it on some pieces of maple veneer, two coats of the dye applied with a sponge and sanded with 400 grit after each coat (after it dried), then applied a couple of coats of acrylic clear finish to bring out the shine.

While not quite what I’m looking for this time, I can see using this as a special effect colorant for something a bit unorthodox. There are plenty of colors available and this stuff is cheap. Enough powder to male 16 ounces (500 ml) of the dye runs $2.49 here in Winnipeg.

I applied the dye to both sides to minimize curling. Test pieces were about the size of a business card.

Sorry there are no pictures, but the missus went to a family wedding in Ontario and she tool our camera with her. If I can get a friend to bring his camera over, I may have photos of the experiments with a later blog update.

Of you’re going to experiment with this stuff, were rubber gloves as it will leave your hands the same color as your project.

I have a couple more techniques to try yet before deciding on the one I will use. Thank goodness the powers-that-be gave us as much time as they did. At first I thought it was too long. NOW, I’m not sure it’s long enough.

Well, my health hasn’t been good this past week, so all I’ve been able to get done was some experimenting with veneering techniques.

Hope to be well enough to get back in the swim of things soon.

It’s been a disappointing couple of weeks, as my back has been acting up again and I haven’t been able to get into the shop. I have, however, I have been able to do some experimenting with the veneering on the dining room table. (there are some advantages having the wife out of town)

I tried the leather dyes and the RIT fabric dyes, but wasn’t happy with the results, so I’ve decided to go outside the wood realm for the colored panels on the Rubik’s cube. I’m thinking of using a high end glossy colored paper with a heavy finish to protect it. It isn’t in a high wear area, so this sdhould work okay.

One thing I’ve wanted to try for quite some time now is using lye to color wood. It took me three days on the phone to track down a place that would sell it to me, and I had to buy ten pounds of the stuff, (which will be more than a lifetime supply) but I finally got my hands on some and tried it out last night. All I can say is WOW! I tried a teaspoonful to 8 ounces of distilled water on my cherry veneer and in no time it went from that light pinky coloor cherry has when newly milled to a deep, rich reddish brown that we all love and thsat usually takes decades to achieve. When you figure out the cost, I could do a complete bed headboard for a couple of pennies! This really pleases the Scot in me! I will definitely be using this technique on the cherry for my Louis cubes. If I learn nothing else from this build, this alone makes it worthwhile, and since I’ve learned a lot more so far, it’s been a blast taking part.

I’ve also been practicing a number of veneering techniques our good friend from LJ Ronaldo has been generous enough to share with me. I’ve been cutting cube sections a dozen or two at a time as my back allows, and hope to have them ready for taping by the weekend and I hope to have the top veneered by monday.

Still no pictures tro share, as wifey dear has the camera with her for her trip to her neice’s wedding. She gets back friday, so I hope to be able to share some photos by the weekend.

I’m sorry to be so slow reporting in, but there wasn’t much to report and that had me pretty depressed for a while.

I’m not sure if my back is going to letr me finish this build ont time, but I know I’m going to do my darnedest to do it, and will finish it no matter when that happens. This has been the most fun I’ve had in ages, and I want to thank the organizers for running this thing for us. I’ve been involved in voluntary operations of many sorts most of my life, ever since my air cadet squadron took part in the Heart Foundation campaign back in ’64, so I know how much work something like this can be. My hat’s off to these guys.

I promise not to be so long posting an update next time.

Been busy cutting tons of diamonds out of veneer for the Louis cube pattern. Started the glue up today by gluing the diamonds to a paper “stretched caul” as the first step in applying the veneer pattern to the substrate.

Wish my fingers would stop sticking to the keyboard! Smile

Well here’s the partially done set of cubes for your approval. They are actually done now, but I haven’t taken a pic yet.

Also included are two pics of the same piece of veneer, one in the raw ans the other a minute after wiping it with a sponge dipped in a lye solution of 1 to 50 by volume. Quite the difference, eh?

Off to the man cave to make some more sawdust. 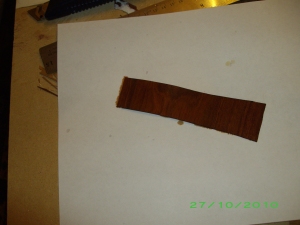